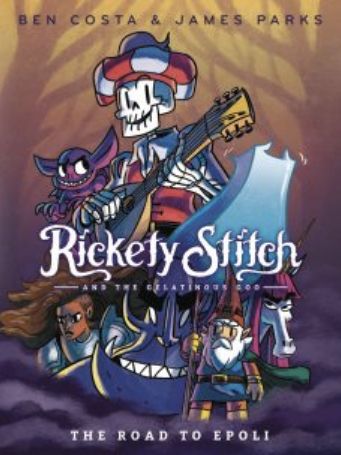 When Ben Costa and James Parks were second graders in Mrs. SooHoo's class at Almaden Country Day School, it was the start of a friendship and creative collaboration that would ultimately span decades, culminating in the upcoming launch of the first entry in their fantasy graphic novel series: Rickety Stitch and the Gelatinous Goo Book 1: The Road to Epoli. The authors will visit Hicklebee's book store in Willow Glen on Friday to meet their fans, sign copies of their new book, and discuss their creative process.

"We met in Mrs. SooHoo's class in second grade at Almaden Country Day School," Mr. Costa said. "As kids, we spent a lot of our time writing, drawing, storytelling, reading, and playing games like Dungeons & Dragons. Later, we both attended California State University Northridge and were roommates. That's where we developed the first stories of Rickety Stitch."

Described as The Hobbit meets Adventure Time, the series tells the story of Rickety Stitch, a talking skeleton minstrel, and his gelatinous friend named Goo. Together they set off to learn about Rickety's mysterious past, embarking on adventures filled with danger, excitement, and a healthy dose of humor. However, it's not all fun and games; because the series is targeted toward teens and young adults, it tackles deeper issues as well.

"Despite the goofy, cornball cartoonishness of Rickety Stitch and its characters, the predominant theme is self discovery," Mr. Parks added. "Rickety wants to know who he was and what he should do with himself. That's something we can all relate to, especially young adults."

When it comes to crafting the Rickety Stitch stories, the friends take a uniquely collaborative approach, working together on every aspect of the books while drawing on each other's unique strengths. They create the world together, write the books together, and Mr. Costa serves as the illustrator.

"The series started out very naturally, with lots of storytelling," Mr. Parks said. "The concept of a whimsical and charismatic skeleton bard, returning from the grave, and searching for where he'd come from was the cornerstone of the entire story. From there the world spiraled into existence relatively quickly. We'd draw and write short stories in the world, and loved filling in the backgrounds of characters."

"For us, it's really just a matter of getting together, bouncing ideas off each other for hours, and hunkering down to write the story," Mr. Costa added. "Then I go off into a hole for a year or two to draw."

When asked how they nurtured their creativity during childhood, the authors are quick to credit their early experiences with writing in school.

"The Young Authors Fair at Almaden Country Day School was huge for me," Mr. Costa said. "I put a lot of effort into writing and drawing stories each year. I remember laboring for hours over a notebook, which my brother then typed up on computer paper, leaving room for my illustrations. Our sixth grade teacher Mr. Knoll was also very focused on creative writing, which let our imaginations run wild on a daily basis."

"I second the Young Authors Fair," Mr. Parks added. "Tremendous fun and such a spectacular creative exercise. In fact, my mother just recently unearthed dozens of poems I'd written for Mrs. Stephens' class in sixth or seventh grade about dragons and gnomes and goblins—not so far off from Rickety Stitch!"

"I remember that both Ben and James were soft-spoken and reserved," Mrs. SooHoo said, "but they were both very creative and had wonderful imaginations. It is incredible to see them now, more than twenty years later, continuing what they started."

Three books in the Rickety Stitch series are currently underway, with another three books planned for the future. For more information, follow the authors on Instagram @ricketystitch.