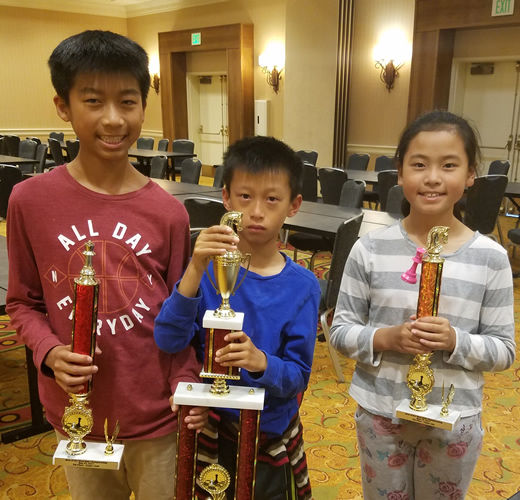 French psychologist Alfred Binet said, "Could we look into the head of a Chess player, we should see there a whole world of feelings, images, ideas, emotion and passion." Anyone observing the school's Success Chess club would have no doubt that this statement is true, witnessing students of all ages and capabilities learning strategies and scrimmaging against their partners. The focus, look of determination, and the sometime quizzical look as they figure something out demonstrates engagement and thoughtfulness.

Third grader Winston joined Success Chess two years ago and he motivated his siblings, seventh grader Bryce and fifth grader Laura, to also start playing chess. They recently helped win first place for Almaden Country School with their chess team at The Best of the West Kids Championship. It was the first time that this honor has been earned for the school and the first time that a school team was composed of three players from the same family!

"Winston and Bryce began playing a couple of years ago and got very good very quickly. They challenged each other and started beating me which made them like it even more," proud father Dr. David Yeh commented. The brothers joined Bay Area Chess Club on the weekends and started to compete in tournaments about a year ago. Laura joined them just a couple of months ago, their enthusiasm and success motivating her.

All three of the siblings enjoy chess for different reasons. While Laura and Winston like the challenge and enjoy the camaraderie (and winning, of course), Bryce also enjoys strategizing. "We all just want to win and have fun too," Winston chimed in.

The United States Chess Federation (USCF) organizes various tournaments for children in order to promote chess. The recent Best of the West Kids Championship involved 29 schools and more than 150 students, and is one of the annual events held in the Bay Area. "Bryce, Winston, and Laura wanted to compete to test their skill and it was the only way for them to play other children at their level, and they loved it," said Dr. Yeh. Five games were played by every player and awards were given to the top players in each level. School awards were given to the top 5 schools.

"Learning to play chess offers many benefits, whether children choose to compete or not. What's exciting about Bryce, Laura, and Winston is how much fun they have playing while they're developing important analytical and strategic skills. Their love of chess will last a lifetime as a result, just like the love of learning they're developing at Almaden Country School. I'm very proud to have these three hard-working young people representing our school with a big victory at the Best of the West tournament!"

Congratulations to Bryce, Laura, and Winston for this first place recognition and more importantly, for their dedication, passion, and resilience for the "royal game" called chess.