Worth a Thousand Words: 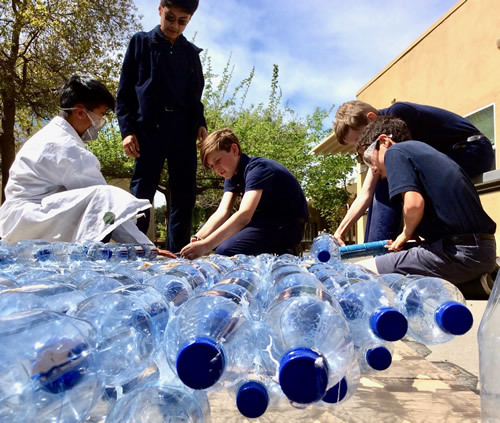 Among the over two-dozen electives offered to Middle School students, the Photography Adventures class is a popular choice. Student creativity is emphasized in this course as students stretch to take unique compositions of nature elements, the alphabet in the wild, patterns, stop motion animation, and more, using only an iPad.

An additional challenge was presented to the class by the Marketing Communications department: capture the essence or spirit of ACS in their photographs. The winning photograph would be featured on the weekly Apple Seed newsletter as well as social media networks such as Facebook, Instagram, and Twitter. "The students have proven their ingenuity on their projects so far and I am excited to see so many cool photos were submitted," remarked elective teacher Ms. Sue Chung.

The winning photo for this contest was taken by seventh grader Madeline Red whose photo, Recycled Water Bottle Raft, won unanimously. The composition, perspective, and focus of this photo were interesting and made it a stand-out among the over fifty photos submitted for consideration. "I chose this picture to be included in my three choices for the contest because I felt like it really drew the viewer's eye in. It showed the spirit of Almaden Country School, and the wonderful teamwork and effort that we students have here. Just in the first part of this trimester I have learned a lot from my photography elective, including how to edit, frame, select pictures, and lots more. One of the best things about photography is how creative you can be! Using what I've learned so far, I plan to take photos in the future."

In Madeline's winning photo, students in the "Calling all Makers" elective were working together to build a recycled water bottle raft (collected from lunches) that could be manned and placed in a body of water. Not only is her subject engaging but it is also striking.

Award-winning San Jose photographer, ACS parent, and one of the judges for this contest, Mrs. Tina Maciej, commented on the photo. "The point of view from which the photo was taken and the blue color of the bottles was a unique combination in the photo. The photographer demonstrated her sense of 'thinking out of the box' by choosing the photo's angle."

Runners up included eighth grader Ellie Lowy for her Boy with his Recorder and 6th grader Sophia Buschini's Solo Kite Flying. These photos were starkly different from one another in style and focus but they also showed something in common: the spirit of ACS is most certainly in its youth.