The final year of Almaden Country Day School's Middle School is filled with students who understand the rigorous academic program yet appreciate the safe and nurturing environment that allows them to take risks and stretch themselves. Our graduates are noted for their poise, confidence and intelligence. 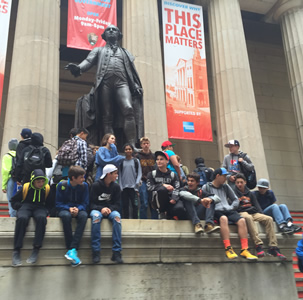 Character education, service learning, and leadership time are integrated into the weekly schedule for all Middle School students.

Annually on average over the past decade, 95% of ACDS graduates are admitted to selective private high schools of their choice. Once in high school, ACDS students become involved in all areas of high school life. They distinguish themselves academically and otherwise, taking Honors and Advanced Placement classes, achieving high marks, participating widely in clubs, performing groups, and on sports teams, receiving service awards and earning college scholarships.
LEARN MORE

The focus of SEL in the eighth grade is on leadership and the continuing development of Mission Skills. Our eighth grade students are offered leadership opportunities throughout the year:

In class meetings, topics include the application process and the emotions of moving on to high school. The spring trip to the East Coast marks the culmination of their preparations for high school and the development of their independence and confidence, which are hallmarks of ACDS graduates.

Each eighth grade student gets to choose two elective courses per trimester. By eighth grade, students are completing ACDS graduation requirements, which include Speech 1, a choice of one service learning and leadership elective, and one Fine Arts or Drama course.

While no longer visiting the library as a class, middle school students continue to congregate in the library to study, read, socialize, and attend Birthday Book Squad meetings.

After studying U.S. history on campus, our eighth graders have the opportunity to visit some of the most noteworthy and celebrated historical landmarks of our nation's past. This eight-day trip to the East Coast is arranged through a professional school tour company and typically includes visits to Williamsburg, Washington D.C., Boston, Mount Vernon, or Philadelphia. Itineraries vary from year to year, but always create a memorable capstone trip for our graduating class.

Each eighth grade student is paired with a Little Buddy from Junior Kindergarten. Throughout the year, the Big Buddies meet to work, play and learn together in a variety of activities.

Middle School Socials
There are four Middle School socials throughout the year, supervised by ACDS faculty: Halloween, Winter Holidays, Valentine's Day and Graduation. The focus is on having fun with friends outside an academic setting.