Ryan Stenn ’96 is the Director of Team Services for the San Jose Sharks.  His job involves, among other things, making travel arrangements and keeping players up to date on practice times and league standings. 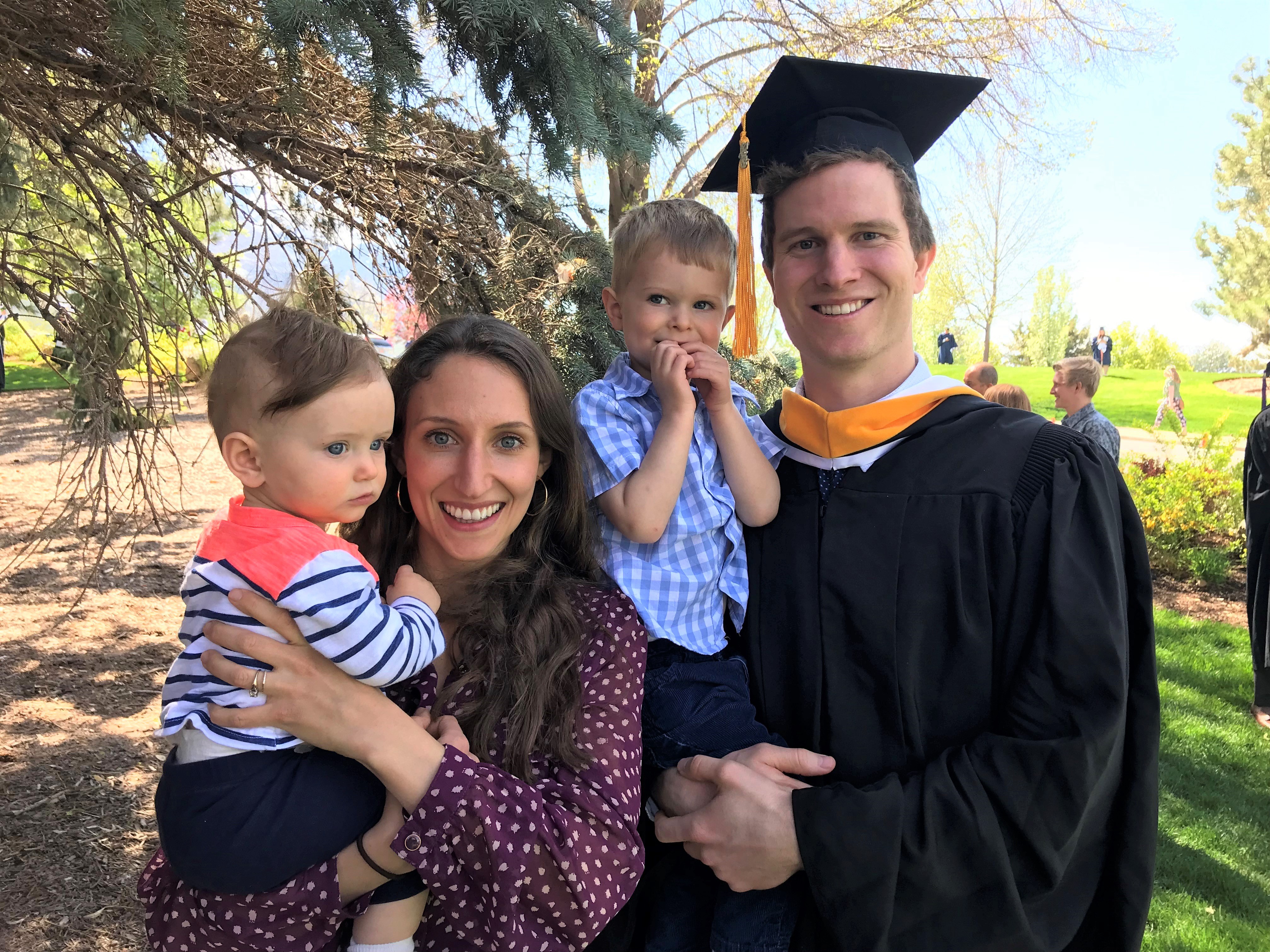 Sam Hayden ’05 graduated from Brigham Young University with a Masters of Science in mechanical engineering in December. He works at the engineering firm Endigit doing custom automation and measurement systems. Sam lives in Layton, Utah with his wife, Eliza, and their son and daughter.

Robert Musci '08 graduated from the University of Georgia with a master's degree in agricultural and applied economics and has just relocated to Walnut Creek.

Gaby Sant’Anna ’10 graduated from Northwestern University School of Communication in June 2018. She was selected for the Stage Directors and Choreographers Foundation Observership Class of 2018-19, through which she recently returned from an opportunity at the Wilma Theatre in Philadelphia. Gaby will be attending the Summer Theater Workshop with SITI Company at Skidmore College this summer and will serve as assistant director to Jess Fisch on Every Brilliant Thing at Windy City Playhouse this August.

Madison Braitberg ‘11 is headed to Austin, Texas, after graduation from TCU to work as an oncology nurse on a bone marrow transplant unit.

Matthew Duffin '11 served a mission for the Church of Jesus Christ of Latter-Day Saints in Seattle, Washington.  He is now working.

Nora (Eleanora Mary Rose) Heindel '11 graduated from the University of Mississippi with a bachelor's degree in exercise science. During her four years at Ole Miss, she rode on the club equestrian team and served as its team captain, treasurer, and interim president. At the end of her senior year, she was named as the University of Mississippi's Sports Clubs’ Female Athlete of the Year. She is currently working as manager at the family-owned infrared fitness studio, HOTWORX, located in downtown San Jose.

Skyler Hunter ’11 has received academic scholarships for all four years at BYU and spent the last three years on the BYU Dunk Team, a trampoline stunt team that performs at BYU basketball half time breaks, other university events, and for schools in the area. Last month, BYU took the Dunk Team and eight other of the university’s top performance groups on tour in China.

Meilani Makhni ’11 graduated from Chapman and was granted the Presidential Award and departmental honors. She will pursue a doctorate in physical therapy at Regis University in Denver, CO in the fall.

Christopher Musci '11 graduated from the University of the Pacific with a business degree.  He is studying for his broker’s license, which would enable him to sell mortgages.

Anoop Praturu ’11 will take a gap year before he applies to graduate programs in astronomy. As part of his gap year, he will be working as a machine-learning engineer with Santa Barbara-based analytics company, Invoca. Their work looks at the statistics of language to build AI-powered tools to analyze conversations.

Cole Hackett ’14 was voted Central Coast Section Boys Soccer Player of the Year for the 2017-2018 season. In the fall of 2018, Cole played soccer for the Cal Poly Mustangs, a Division 1 team.

Meaghan Schapelhouman ’14 will be the assistant director for Mr. Leonard’s summer drama camp held on the ACDS campus.

Sophia Barwegen ’15 recently participated in a 27-day backpacking trip in Yosemite, and this summer, she will be in interning at Lasting Adventures, a guide service in Yosemite that specializes in guided backpacking trips, day hikes and outdoor youth summer camps. This year she qualified to participate in the California State Science and Engineering Fair.  Her research was on the effect of light pollution on dark sky brightness and the Calvin cycle of wildflowers in Yosemite National Park.  She also qualified this year to participate in the California High School Speech Association Championship for expository speaking.  Her speech was titled Switchbacks of Death/Topic: Trails.

Ethan Fusilero ’15 graduated with honors from Archbishop Mitty High School as a member of the National Honor Society (NHS) and is a California Scholarship Foundation Life Member. He competed on the varsity swim team for all four years, was team captain in his senior season, and holds the men’s swimming records for the 50- and 100-yard freestyle. Ethan was also awarded Mitty’s Gary Braia service award in his senior year for exceptional service to the school community.

Karina Kleveland ’15 will spend a year in Norway participating in a backpacking program.

Julia Konovalov ’15 graduated from Leland High School with the Seal of Biliteracy, an Award of Academic Excellence and the Golden State Seal Merit Diploma.  Julia will be studying psychology with French and Dance minors at Gonzaga University, where she is the recipient of a Trustee Scholarship and a Gonzaga Grant, which is awarded for academic achievements and overall character during high school.

Julia has also been a competitive dancer at Capitol Dance Company for almost ten years.  This year her group dances received first place and her solo dance received fifth place at the Spotlight Dance Competition held at the Santa Clara Convention Center.

Stefan Larsen ’15 competed in cross country and track for four years at Bellarmine College Preparatory. He was also on the Associated Student Body for two year and co-founded the philosophy club.

Devin Makhni ’15 graduated with honors from Archbishop Mitty High School as a member of NHS and the California Scholarship Federation (CSF).

Sam Olson ’15 graduated at the top of her class at West Sound Academy in Poulsbo, Washington with an International Baccalaureate diploma. She was the editor of her school’s award-winning student literary publication, Mudpie, during her junior and senior years and also founded her school’s philosophy club.

Kirina Patel '15 will be attending the University of St Andrews in Scotland in the fall. She will be pursing a degree in economics and history. Karina graduated with highest honors from Notre Dame San Jose as AP She also graduates as an AP Scholar with Distinction. Her senior year she was president of the Harry Potter Society at school and treasurer for the Los Gatos Ballet Junior Guild. She performed in her 11th Nutcracker with her studio in December at the Flint Center and just participated in her final full length ballet, Sleeping Beauty, at West Valley Theater.

Caity Redfern ‘15 graduated from Interlochen Arts Academy in Michigan and is excited to be one of only 30 students admitted to the University of North Carolina’s School of the Arts drama department. She will be performing professionally this summer in San Francisco as the lead in Heathers the Musical in July, and in the play Stupid F**king Bird in August.

Anisha Reimert ’15 Graduated from Presentation High school with the award for the Outstanding Speech and Debate Team Member.

Lucas Sant’Anna ’15 graduated from Archbishop Mitty High School with honors, as a member of both CSF and NHS. He was awarded the school’s General Excellence Award for English, Social Studies and Religious Studies as well as the Varsity Volleyball Scholar Athlete Award. Lucas was the libero his last two years on the varsity volleyball team and for his club volleyball team, Bay to Bay. His club team won the Boys Junior National Championships in Phoenix, AZ in July 2018. Lucas also participated in newspaper and was a leader in the Mitty Advocacy Project working on social justice issues as well as serving on MAP’s steering committee.

Patrick Ward ’15 graduated from Saint Francis High School with honors and is receiving his Eagle Scout award. He’s excited to attend the University of Vermont in the fall, and is looking forward to spending his time snow skiing, playing ice hockey, and eating Ben and Jerry’s! 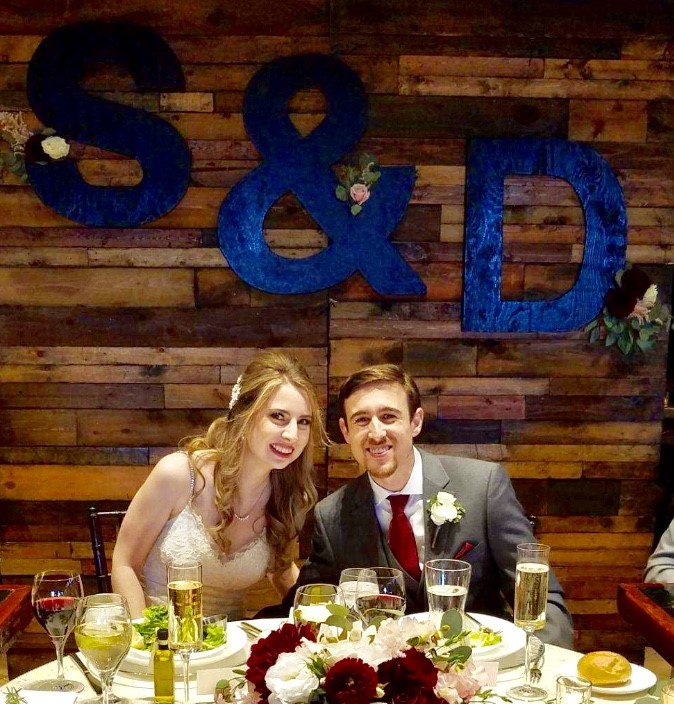 Sarah Sendig ‘05 and David Laone ‘05 wed on May 19, 2019 at the event center at Rubino Winery in Pleasanton. Numerous ACDS alumni were present to celebrate with the couple including Deanna Sendig ’08 as bridesmaid, Cooper Laone as best man, and Cole Connelly ’05 and Tony Diepenbrock ’05 as groomsmen.

Sarah and David met at ACDS in second grade and reconnected when they both went to work for Qolsys, Inc. in San Jose. The couple honeymooned in Greece and Italy and live in San Jose. 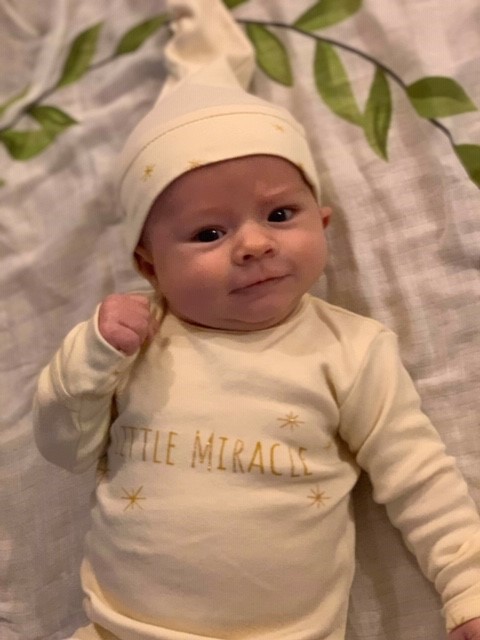 Kristin Freiburger McGee '00 and her husband, Michael McGee, are proud to announce the birth of their son Bennett.

Welcome to our ACDS family!