Hannah Conradt ’12 graduates from the Fashion Institute of Technology with a BFA in Special Occasion Fashion Design in 2022, but has experience and accolades that would rival a professional 10 years her senior. She has sewn costumes for Twenty Pilots including the iconic red cloak in their 2018 video Jumpsuit, and for Hailey Williams of the rock band, Paramore. Hannah has worked as a wardrobe assistant for a Lifetime movie in LA, helped costume an entire two-cast NYC-based production of the opera The Barber of Seville, and completed a summer internship in the Seattle Opera's costume department. Recently, one of her class projects was featured in the New York Times. Tasked with creating a wedding dress last year, Hannah created a dress which not only marks marital unity but reminds us to be unified in our fight against the global pandemic.

Hannah attended ACDS from 3rd to 8th grade then left the Bay Area to attend Mercer Island High School in the Seattle area. She identifies as a queer artist who aims to be a role model to those who and want to live free to take alternate routes to success. Her time at ACDS gave her a place to explore her learning options and skills to advocate for herself. She remembers a community that listened and supported her, where her needs were met, and opinions mattered. 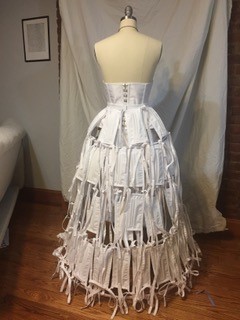 ACDS' annual plays were Hannah's favorite tradition and continued participating in musicals in high school and college. Through the plays, learned the importance of respecting people regardless of skill level. She also enjoyed being a part of the Birthday Book Squad because she got to run around with teams of other middle schoolers in capes while bringing joy.

Hannah's advice to current ACDS students is "Don't be afraid of trying things outside the box. If you find something you love…go for it!" She adds that "It is completely normal not to know what you want to do with your life…try not to stress too much."

To prospective families, "This school is a community [whose] atmosphere is one of respect."